MAKING SENSE OF UNEXPLAINED MYSTERIES, GLOBAL COVER-UPS AND VISIONS FOR A NEW ERA

Why do so many people now believe in conspiracy theories, and what is the evidence to support them? What is the basis for the wide belief that we are now in a ‘New Era’ of massive change and consciousness shift? Why is there such huge but officially undeclared interest in paranormal phenomena from authorities and religions? How does all of this tie together and explain the agendas of control and surveillance in the West, and what can we do about it? 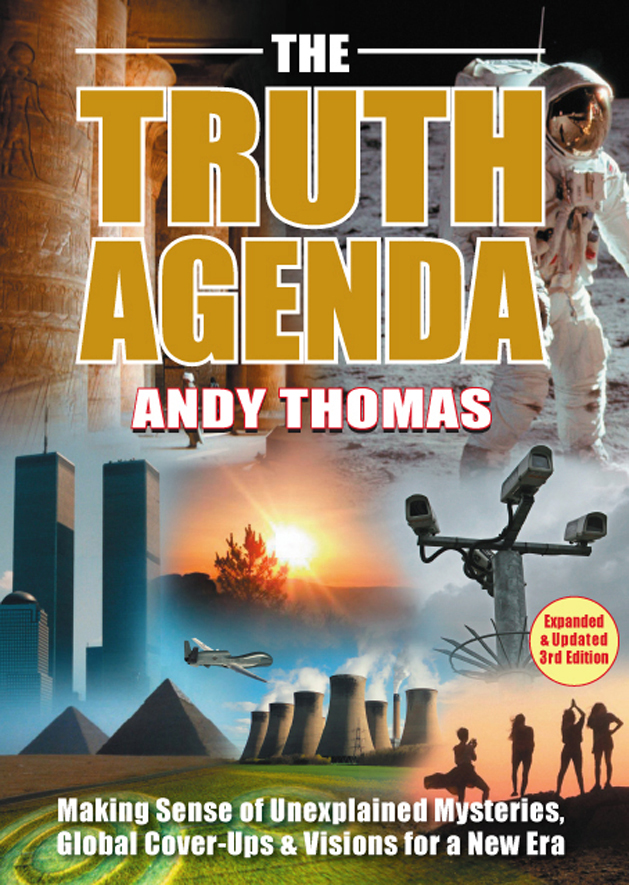 The Truth Agenda: Making Sense of Unexplained Mysteries, Global Cover-Ups and Visions for a New Era explores some of the most famous unexplained mysteries and global cover-ups of recent history. What is the truth about UFOs, pyramids, psychic phenomena, visions of the future and ancient prophecies, and what is their connection to famous conspiracy theories concerning the Moon landings, 9/11, the New World Order and claims that the world is covertly run by a powerful ruling elite..?

Andy Thomas pulls these many threads together in a refreshingly accessible and stimulating overview, addressing the issues in a credible analysis which suggests that the world we live in may be very different to the manipulated picture presented by governments and the mainstream media. Many people believe that a secret global cabal is anticipating some kind of imminent huge change, based on ancient prophecies, and that it has been implementing a regime of draconian restrictions by nefarious means to ensure it retains its control throughout. Is a spiritual and philosophical revolution about to transform this situation, however, and if so what part can we all play in creating a more positive future..?

Since its first edition in 2009, The Truth Agenda has been acclaimed as the best all-round guide to the big picture of unexplained mysteries, global cover-ups and visions and prophecies for our times. Its revised 2011 edition cemented its reputation, and the third updated, rewritten and slightly re-designed version in 2013 (expanded to 404 pages), with a brand new cover and subtitle, provides the definitive experience. A newly edited US black and white version, published by Adventures Unlimited in 2015, is available in the US here.]  The book is easily available online or through Waterstones and other high street retailers.

Order The Truth Agenda from Amazon here, or get a signed copy from Vital Signs Publishing here    * US version here

‘Rather brilliantly, Thomas explains how we can transform pessimism into positive action, and presents further incredible evidence for the power of collective positive thought. Utterly mind-blowing’ – Spirit & Destiny

‘This book is written with a rare ability to to articulate complex ideas in a simple way, is immensely well-researched and is immaculately presented, with over 100 colour photos. It is exceptional value for money and the best book on the subject I have read’ – Paradigm Shift

For many more comments, go to Reviews

Andy describes the aims of The Truth Agenda:

‘The Truth Agenda was written to open a much-needed window of clarity on the world of mysteries and cover-ups for those who may be confused by all the many different sources of information out there. Some tomes are too dense or too extreme to reach out to the curious who might benefit from being exposed to the hidden truths behind the facade of ‘consensus reality’. This book is offered as a remedy and is presented straightforwardly and attractively, with many photographic illustrations throughout, building up its case logically as it goes. The concealment of important mysteries and the worrying ongoing withdrawal of liberty and freedom of speech in Western society needs addressing as widely as possible and ‘making sense of’, as the subtitle suggests. Happily, the final chapters conclude that, with enough collective determination, we can – and will – offset any dark agendas and create a more positive world for future generations.’

‘The Truth Agenda – all three of its editions – has been several years in the making, based on what I have learned from giving countless presentations around the world about all the many areas covered by the book and realising what it is that people need to hear to make them more open to these subjects. Talking to ordinary people makes it clear that in fact many are concerned that they are not being told the real story about what is going on in the world, and I have found much openness to the subjects from a far wider demographic than the media or the authorities will ever admit to. Presented with something rationally and reasonably, and with the fear of ridicule reduced, people will listen. The Truth Agenda is presented in this spirit and is designed to reach out to both the lay person and those already dedicated to knowing more about the hidden aspects of our society, and is deliberately written in a balanced, clear and non-partisan style.’

‘Aside from the years of research and experience, the book took around two years of actual writing for the first edition, with many more months spent on it since for the updates. Hopefully readers will find something useful from the fruits of that labour. If The Truth Agenda makes people look around them at the world they live in with even slightly new eyes and a more positive hope for the future, then it will have served its purpose.’