CONSPIRACIES: THE FACTS – THE THEORIES – THE EVIDENCE

A new fully revised and updated edition of Andy’s seminal book Conspiracies: The Facts – The Theories – The Evidence is now available…

The much-updated and expanded edition of Conspiracies arrived at the end of 2019. Produced by Watkins Publishing it is fully available through all online and high street retailers in the UK, USA, Australia and beyond (some links below).

The Moon landings; JFK; Watergate; The Gunpowder Plot. 9/11; The New World Order; Fake News; Donald Trump – since the political intrigues of the Roman Empire, nearly every significant event of the last 2,000 years has sparked off a conspiracy theory.

Andy Thomas sifts through the evidence of all the major conspiracy claims, and more, analysing it intelligently and compellingly in this timely overview of essential subjects which potentially influence everyone’s lives today. Thematically arranged, the accounts are stripped of unfounded opinion and presented factually but accessibly, dramatically highlighting the core issues. It is up to the reader to decide where the ultimate truth behind each theory lies – but it is clear that at least some conspiracy speculation should be seriously considered.

Order Conspiracies from Amazon here, and in the USA here – or get a signed copy from Vital Signs Publishing here.

Inevitably, much has occurred in the world since the first 2013 publication of Conspiracies, and this edition (now extended to 321 pages, with a brand new cover) takes into account many of the huge developments which have affected people’s awareness and perception of all things conspiracy-related since then. It updates some of the original content and adds a lot of new material to make it one of the most cutting-edge, accessible and crucial guides available as to why people really believe in conspiracies and why it matters more than ever that we keep conversations going about them in the face of ever-growing censorship. The book came out just as the 2020 pandemic began, so a special preface which addresses the many theories around this has been added for the Kindle and e-book editions and will be absorbed into print editions in due course. 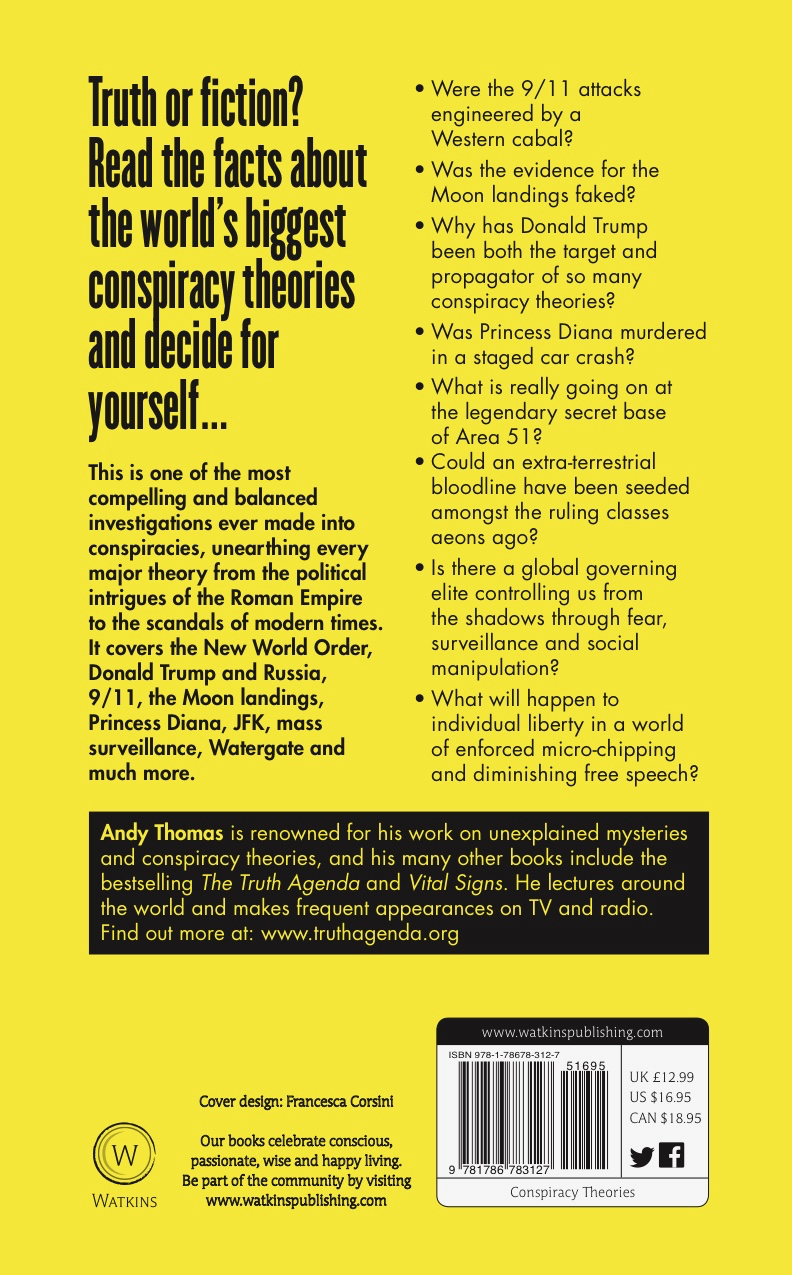 As well as covering all the classic conspiracy areas featured in the original edition, the substantial new material adds in many entries about the following:

If you are ever confronted by people demanding to know why anyone would ever believe in conspiracies, this book is designed to help show them, leaving individuals free to make their own minds up, but also making clear that there are substantial arguments that deserve proper consideration in a world of denial and obfuscation.

Review of the new edition, from Phenomena magazine: 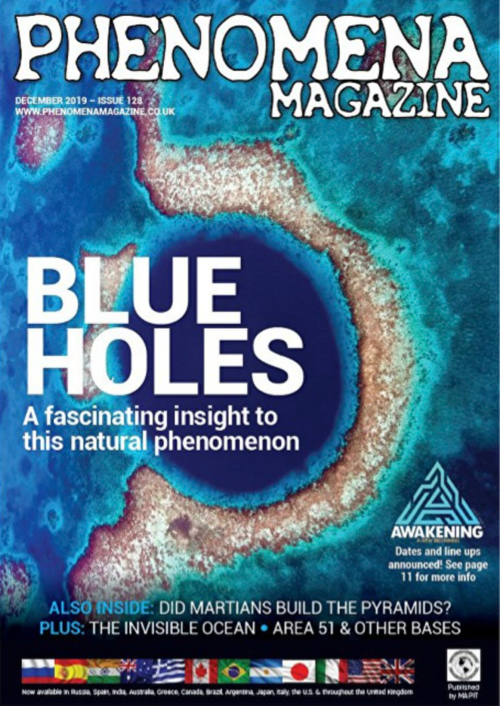 Whenever the subject of conspiracy theory arises, there is almost an automatic response and that is the name of Andy Thomas. Andy is one of the most respected contributors into this always contentious field and also one of the most careful and considered in his views. In this, his latest contribution to the subject, it is in fact a revised and updated version of his earlier works and in this case the updates add an extra bite to his conclusions. Most of the usual subjects are here, including the fiasco of 9/11 (how anyone can still seriously think that this was not a carefully calculated inside job is beyond this reviewer), Princess Diana, the New World Order the Illuminati, the Moon Landings (or lack of them), yes, they are all here. However, what is new and much needed, is an overview of the Trump presidency and all that involves and indeed what might yet be unearthed about it. What this book (which is a genuinely fascinating and absorbing read) does do however, is begin with a rationale for conspiracy theory and then group all the best known into different categories, ranging from political and extra-terrestrial, to false-flag and assassinations and at the end of each the author gives a for and against summation of the evidence. For anyone new to the subject they could do much worse than sample this as their introduction to the subject: in fact they also should then seek out his earlier masterwork on the subject, The Truth Agenda.  BRIAN ALLAN, Phenomena Magazine

1 – WHAT IS CONSPIRACY THEORY?

What really constitutes a conspiracy? Who can be classified as a ‘conspiracy theorist’ and why is it necessarily a bad thing to be one, as the establishment would have us believe? What are the psychological traits that lead people to question official viewpoints and do their critics exhibit the very same traits?

How does the Great Fire of Rome resonate with certain modern events? Why were there so many Tudor conspiracy theories? Was the famous Gunpowder Plot in truth a government set-up? Was James II’s heir really stillborn and a replacement smuggled in via a bed-warming pan? Were the false tales of a 17th century ‘Popish plot’ a conspiracy in themselves?

Did Winston Churchill seal the fate of the ocean liner Lusitania to bring the Americans into the First World War? Did President Franklin D. Roosevelt sacrifice Pearl Harbor to enemy action? What resonance does the burning of the German Reichstag parliament have to later events? Was the ‘accidental’ attack on the USS Liberty in 1967 an attempt to foment a wider Middle East war? Did the Vietnam conflict begin with an entirely fictional event?

What was the Watergate/Nixon affair really all about? Do anomalies in the photographic evidence and other areas support the theory that the whole truth of the NASA Moon landings has not been told? Was the WikiLeaks scandal a manipulated plot to distract from other, more serious crimes? Did the exposure of global mass electronic surveillance by whistleblower Edward Snowden really change anything? How has the rise of ‘fake news’, post-truth and populism been used to justify a new and worrying trend of draconian online censorship? Why is Donald Trump both a believer in, and a target of, many conspiracy theories?

Were there other gunmen present at the shooting of JFK, and why did Jack Ruby really kill Lee Harvey Oswald afterwards? Was Diana, Princess of Wales, murdered, as the majority of British citizens think? Did UN weapons inspector David Kelly really take his own life?

Could the attacks of 9/11 have been wholly or partially engineered by agencies within the USA itself, as around 50% of the world’s population now believes? Did the 7/7 London bombings take place as we were told? Could Russian intelligences have been involved in the infamous Moscow apartment-block explosions? Were the Russians really behind the poisoning of ex-agent Sergie Skripal and his daughter in Salisbury, or could it have been a false-flag attempt to encourage a new Cold War?

Was evidence of a crashed flying saucer found near Roswell hidden in the legendary Area 51? Why do so many people believe that evidence for UFOs and ETs is actively covered-up? Did a race of reptilian aliens seed a bloodline aeons ago which has been handed down through the ruling classes over the centuries?

Is there a secret governing elite ruling from the shadows, using fear, economic manipulation and control agendas to create a network of global superstates? What will happen to individual liberty if micro-chipping is enforced in an increasingly intrusive surveillance state? What are the secrets of the occult Bohemian Grove rituals, known to be attended by high-level politicians? Is ‘Agenda 21’ an environmental front for harsh authoritarianism planned to depopulate the world? What is the basis of the belief that ‘chemtrails’ and high-energy technology such as 5G communications and the controversial HAARP project are being used to oppress humankind..?

9 – HOW FAR SHOULD CONSPIRACIES THEORIES GO?

How do initially unlikely-sounding theories, such as the one that says Beatle Paul McCartney actually died in 1966 and was replaced by a double, give valuable insights into the many grey areas of conspiracy theory? How do considering such ideas encourage people to question anything and everything, no matter how upsetting or controversial, leading to belief in faked terror attacks using ‘crisis actors’ and the challenging of even very sensitive atrocities? Should a line be drawn, and if so where..?

REVIEWS OF THE PREVIOUS 2013 EDITION: 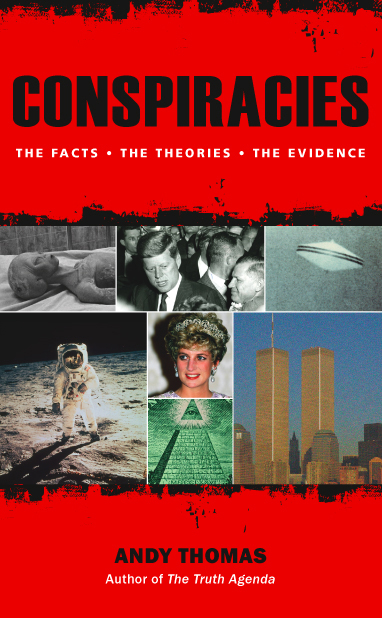 ‘Reasoned, objective and, most importantly, fair. It is a valuable addition to the existing canon of literature in this most fractious of subjects: fascinating, sometimes worrying and highly recommended.’ – Phenomena Magazine

‘A highly readable, accessible guide to key conspiracies from Roman antiquity to modern times… Whether steeped in conspiracy lore or just a novice, you’ll get a better handle on what’s really going on in the world by reading Andy Thomas’s Conspiracies.’ – Nexus Magazine

‘Rational analysis of available evidence is essential in order to draw an informed conclusion. This is precisely what Andy does in this book, which makes it a reliable source for those unfamiliar with this kind of material… It is neatly self contained and recommended as a useful introduction to many controversial topics.’ – Network Review

For more comments, go to Reviews.

Andy describes the aims of Conspiracies:

‘After writing The Truth Agenda, I realised that I had much more to say on the direct subject of conspiracy theories and I wanted to explore their background and history in a broader way. A welcome opportunity came up to write a book on the subject for the renowned Watkins Publishing and I was happy to take up the challenge. Aware that talk of conspiracies is all too easily dismissed and attacked by the mainstream media and establishment, I was keen to ensure that the picture presented in Conspiracies was as credible and rational as I could make it. Too often, the academic world is guilty of the very same foibles it accuses conspiracy theorists of, and I wanted to explore its false perception of theorists in the first section, before moving on to look at the actual evidence for the conspiracies themselves.’

‘The historical parallels for today’s theories are rife, so parts of the earlier chapters look at some of the precedents, to show that claims of ‘false flag’ attacks and establishment plots have always been around in one form or another – often with good reason. If they could happen in past centuries, why not now? Thus the book makes a strong case for this. Moreover, I wanted to anticipate some of the criticisms that are often thrown towards certain theories, so I included at the end of every chapter a selection of these typical comments, followed by a series of reasonable answers to many of them, ones that I believe should be listened to more than they are.’

‘Overall, Conspiracies exists to give the best and most accessible overview possible in a readable-length book to a subject that can often be complex and much misunderstood. The response to it has been very positive and I hope, like The Truth Agenda, that it provides a valuable tool for getting closer to the reality of things all too often denied by those with much to gain by public ignorance of these crucial areas.’