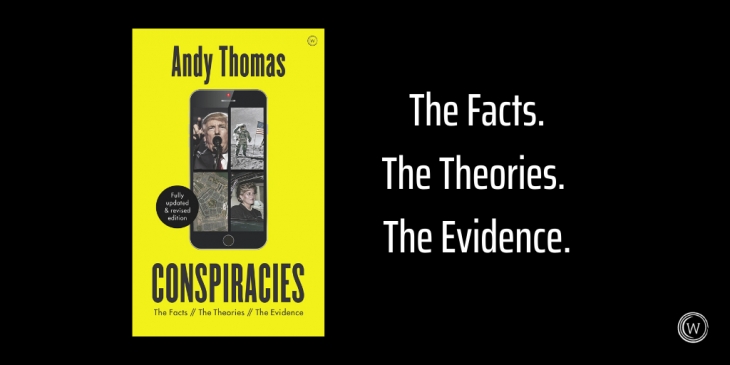 Alternative theories on the pandemic have attracted attention to the world of conspiracy thinking in good and bad ways. Andy has thus contributed a new preface to the Kindle version of his book Conspiracies: The Facts – The Theories – The Evidence which addresses these issues…

World events don’t stay still for long; the new fully revised and updated edition of Andy’s book Conspiracies came out just as the world began to hear about the new pandemic. Now that COVID-19 – or at least the many arguments about whatever is going on – is the biggest story on the block, it became necessary to write a new addition in the form of a preface which examines the theories about these as a good example of the divisions and complexities that can arise in conspiracy circles.

The new preface is initially only available for the Kindle/e-book version but will eventually be adapted and absorbed into the book’s next physical print run.

Produced by Watkins Publishing, as well as covering classic conspiracy areas such as historical intrigues, JFK, Watergate, the Moon Landings, 9/11, Princess Diana, the New World Order and much more, the latest edition had already added in many entries on more recent events. Details of the contents can be found here.

Conspiracies is also available as an audiobook, read by actor Richard Lyddon.  All editions can be ordered easily from Amazon in the UK here, and in the USA here.