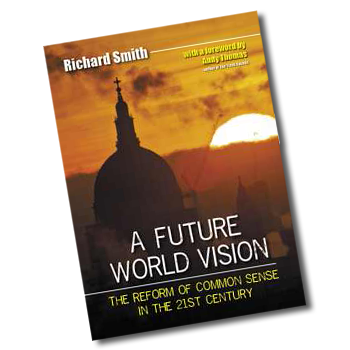 Andy Thomas is pleased to announce the publication of a brand new book through his Vital Signs Publishing arm, which should be of interest to anyone looking for a gleam of practical hope in turbulent times.

Andy says: “A Future World Vision: The Reform of Common Sense in the 21st Century is a very timely and useful handbook.  Although I am not the author this time, I have edited and published the book, and provided a foreword for it because I believe it deserves to be widely read.  The author, Richard Smith, has produced a sharp and heartily readable guide that I would greatly recommend to everyone.  A few advance copies were made available at the Glastonbury Symposium, to a very positive response, and the book is now fully available to order online or by post.”  Details follow!

A Future World Vision: The Reform of Common Sense in the 21st Century

SYNOPSIS:  How did we get to where we are today, and how can we best move forward positively from here? In this perceptive and accessible investigation, Richard Smith puts the shape of recent centuries into context and proposes how a better future could be forged with simple common sense reforms of our democracies, everyday lives, economy, and use of resources and technology.

A Future World Vision also explores the implications of the possible arrival of extra-terrestrials, ‘free energy’ devices and spiritual shifts, and looks at how to fairly deal with global conflicts, population crises and the rise of conspiracy theories, in this timely and insightful guide to 21st century dilemmas.

Author Richard Smith has been involved in the ophthalmic optics industry for many years and has visited 25% of UN-recognised countries. He was one of the founder members of The Parallel Community project and is a familiar figure in the alternative world.  Richard stood as an independent parliamentary candidate in Cornwall for the 2005 UK General Election.

“This new book is one of the most no-nonsense, insightful and articulate of its kind that I have ever read. It is written with obvious passion and sincerity, is immensely well-researched and above all immediately accessible. It is also extremely ‘dippable’ as well and there is a nugget of wisdom on almost every page. The book is absolutely essential reading for anyone trying to make sense of the world around them and why it seems to be going to Hell in a handcart… The book covers a multitude of grey areas – no stone is left unexamined in an effort to find a practical solution that might just help us find an answer before it’s too late. This is an absolute must-read for anyone… Go out, buy it and learn!” – PHENOMENA MAGAZINE

FROM THE FOREWORD BY ANDY THOMAS:

“I am immediately struck by the unusually practical tone that Richard Smith’s writings exhibit. Here are some of the problems of modern society being identified and put under the microscope, as is necessary to do when directly faced with its many dysfunctions, but here also are some well-thought-out solutions being offered…  Richard’s writings speak plainly with unabashed outrage at some wrongs, but also offer encouragement and insight for those seeking rights.  Richard does not shy away from moving beyond what some might reductively call ‘real world’ issues, as the later part of the book shows. His willingness to widen out the implications of what reform might really mean for us if we apply it to all ways of thinking, even if rejected by the mainstream, is admirable. His views on conspiracy theories, for instance, are fair and balanced in ways which media pundits might take a lesson from…  The book dissects some selected key issues in a way that helps kickstart wider discussion of necessary reform in a number of important areas. His analysis does a fine job of explaining the historical developments that have led us to be where we are, and it is refreshingly accessible and incisive. More importantly, Richard does not point the finger at the governing classes as the sole source of where required change must come from, but also shines a light on how we all might look again at the ways in which we live our own lives within the systems that currently bind us. Change, if change is to occur, must come from both inside and out, above and below.”

Ordering direct from Vital Signs Publishing not only gets you a signed copy, but also helps support the author and publisher (and thus future projects) more directly, but if you prefer to go through Amazon, it is there too.

If you enjoy the book, please feel free to add a review to the book’s Amazon page, whoever you order it from!